Below you’ll find a growing concert video, illustration and photo archive from many of our shows over recent years. As Common Ground is an all-volunteer run organization, we need your help filling out this section of the site. Next time you come to one of our shows, bring a camera, video camera (assuming we have the artist’s permission), or yes, even a sketch pad, and help us document the great music and spirit you’ll find at Common Ground. Then email your images to us at commongroundfusw@aol.com. We’ll make sure to credit you for your work, and who knows, if we post it online, we may even give you a free brownie!

South Presbyterian Church begins to fill up in anticipation of the show. The concert raised funds to help maintain the church’s historic century old pipe organ (seen at rear), which had been damaged by vandals in the previous summer. (Photo courtesy of Jim Metzger) 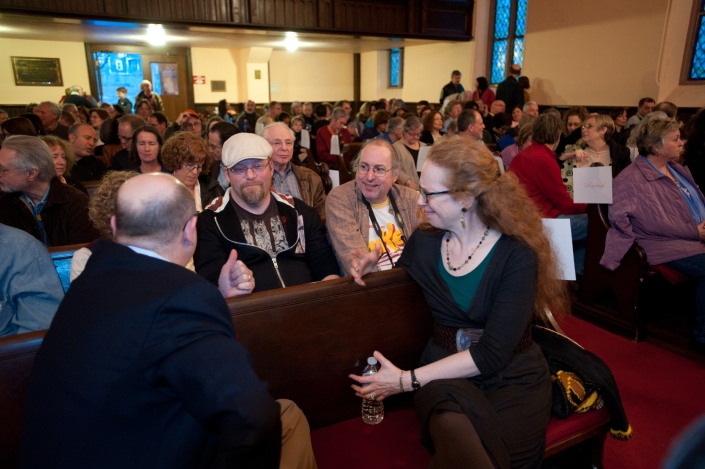 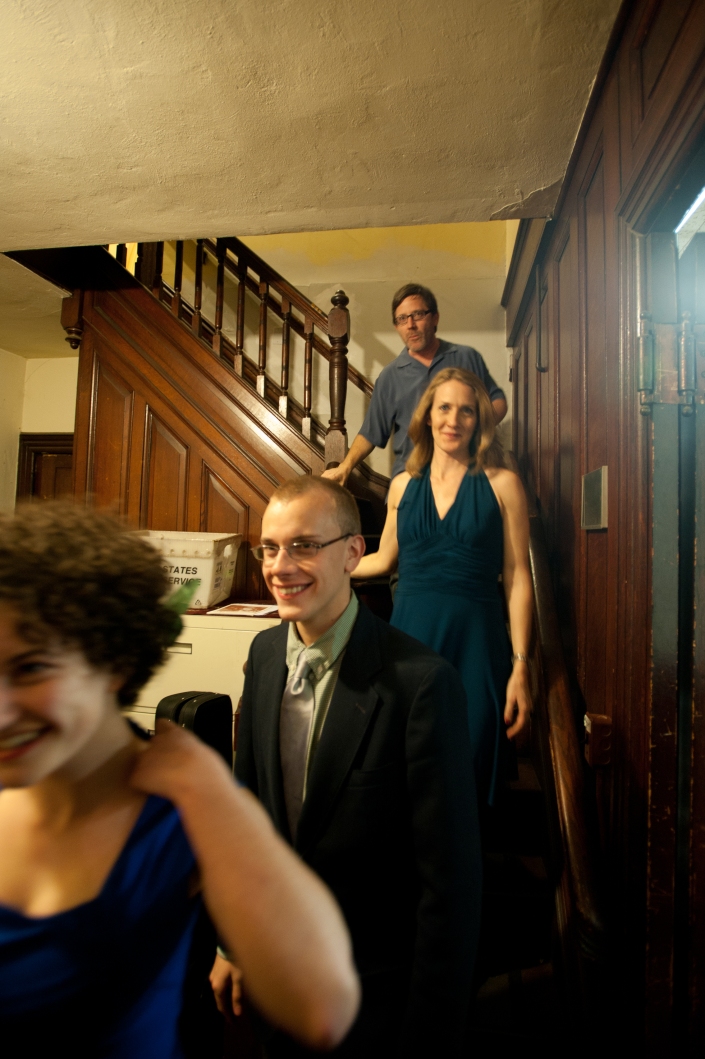 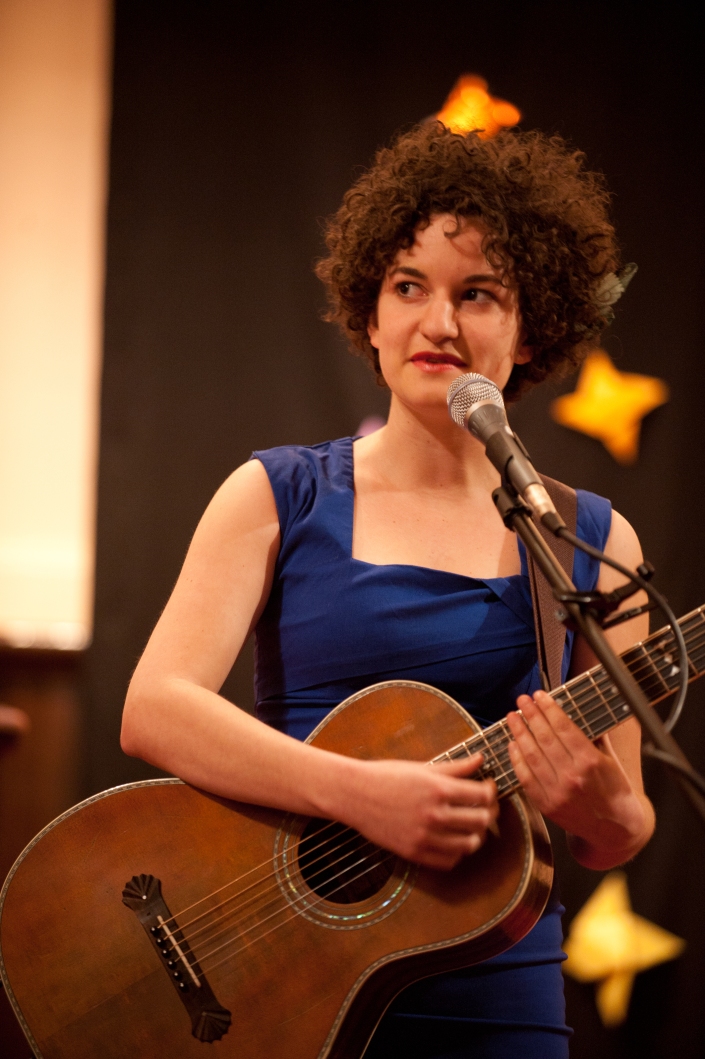 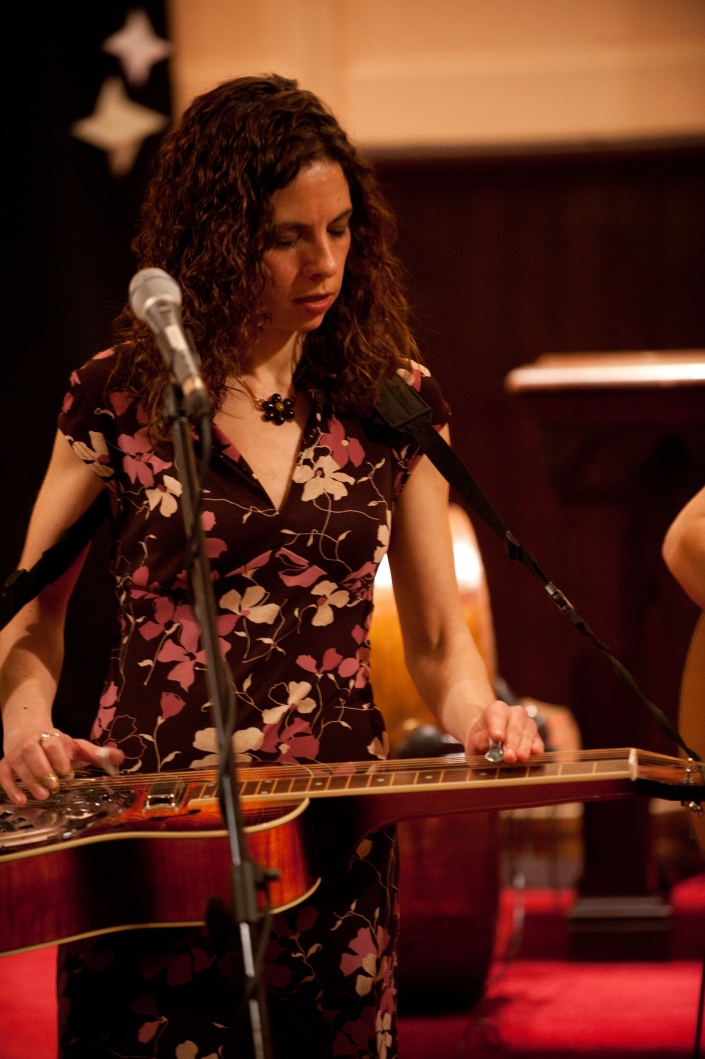 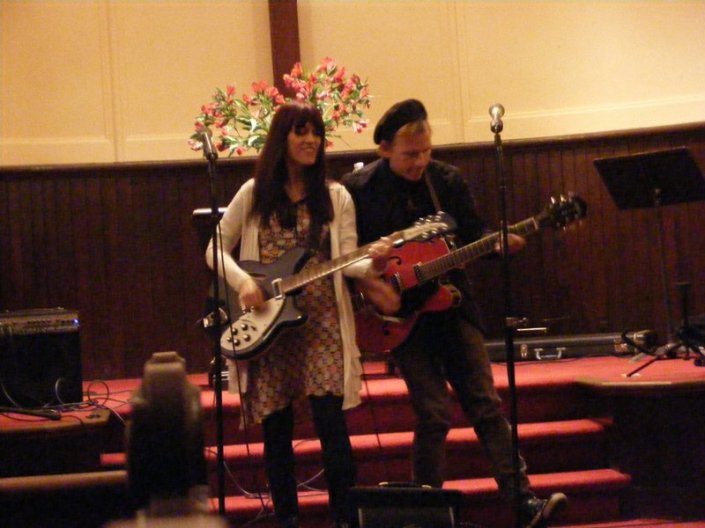 October 10th, 2010: United Way’s Camp-A-Palooza, featuring The Kennedys, Bokandeye African-American Drumming and Dance, and the Take Me to the River Children’s Chorus 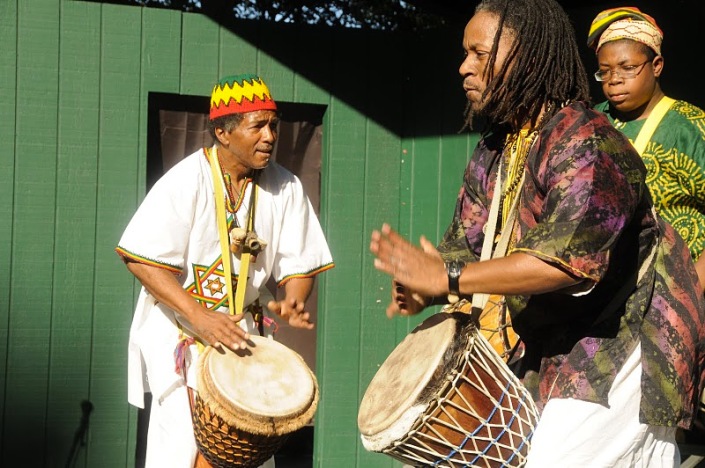 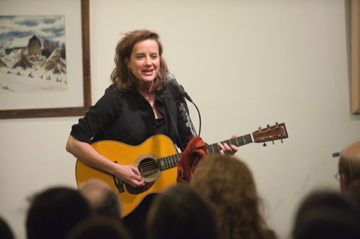 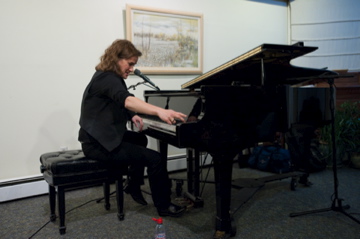 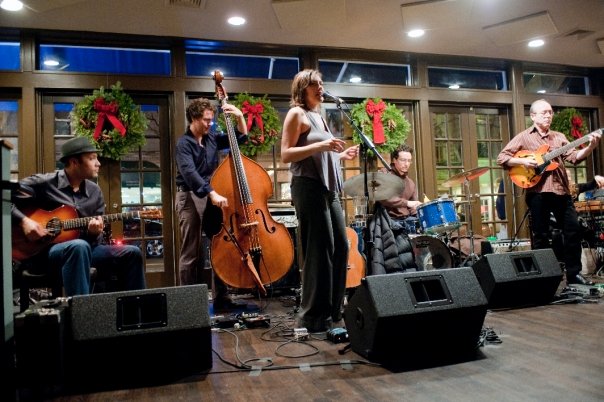 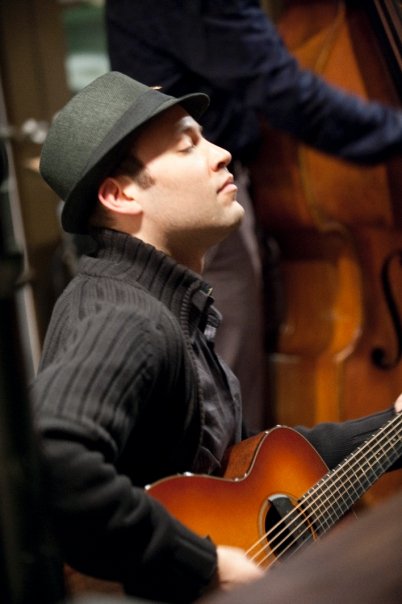 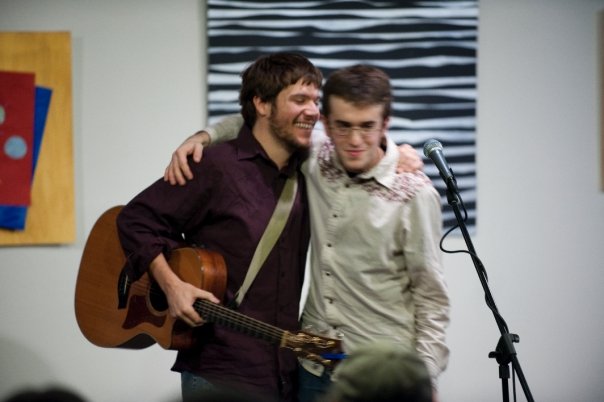 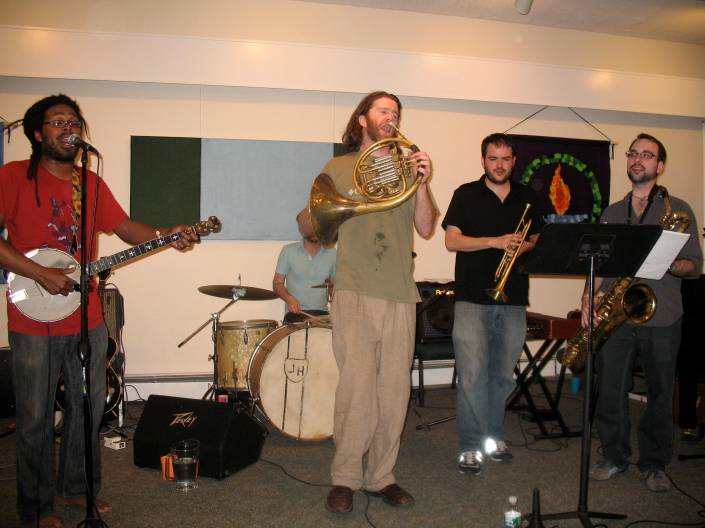 February 28, 2009: Songwriters in the Round, hosted by Maura Kennedy, and featuring Karen Savoca with Pete Heitzman, and Sam McTavey 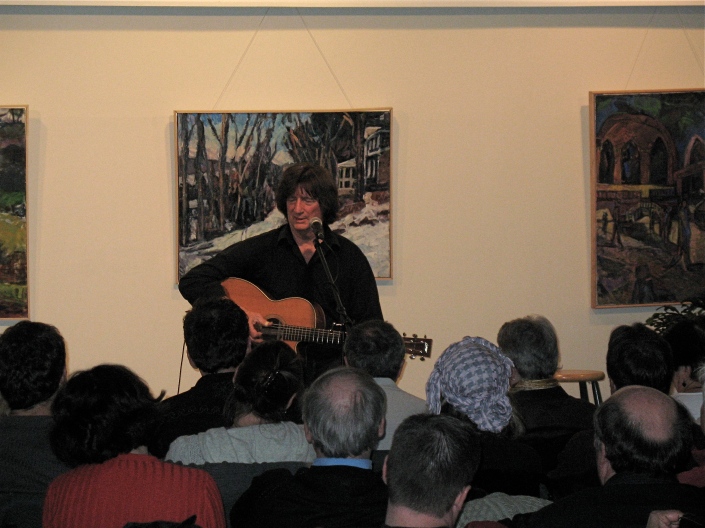 Bald guys get special reserved aisle seats at all of our shows. Just kidding. But that’s me in the middle. (Courtesy of James Howe)

Here’s Tony Dekker and Great Lake Swimmers performing the gorgeous “There Is A Light” to end their September 27th show. Below that, you’ll find some stills of opener Patrick Porter, as well as more of Great Lake Swimmers. What a way to begin our 7th year at Common Ground. 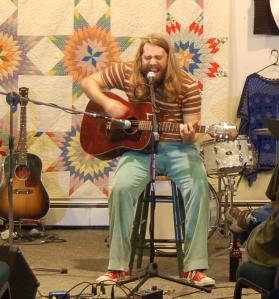 Guy Davis played the last show of our 07-08 season on a horrendously stormy night, with flooded roads, car accidents and just a generally bad mojo in the air outside. Inside was a different story, as we still managed to get a nearly full house of people who managed to row, swim, or scuba their wet selves over to Common Ground for a delightful show. It was a wonderful way to end our ’07-’08 season, and we send our huge thanks to Guy and everyone there for making it such a special night. Below you’ll find more pics, plus here’s a series of clips from the show — courtesy of our friend Simon Feldman at Hudson Valley Music Channel. Click on the first photo immediately below, sit back and enjoy! 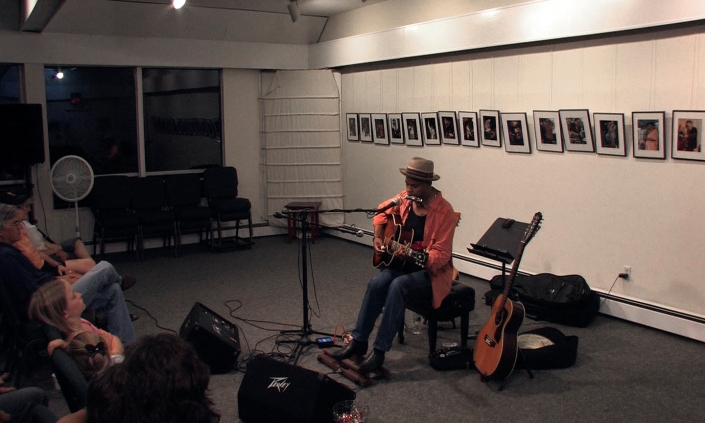 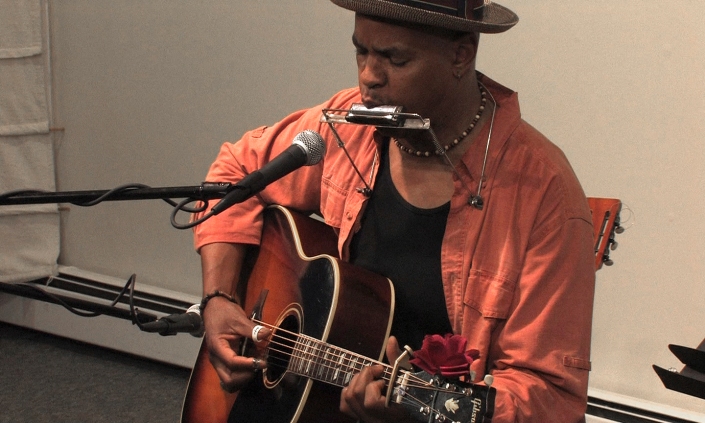 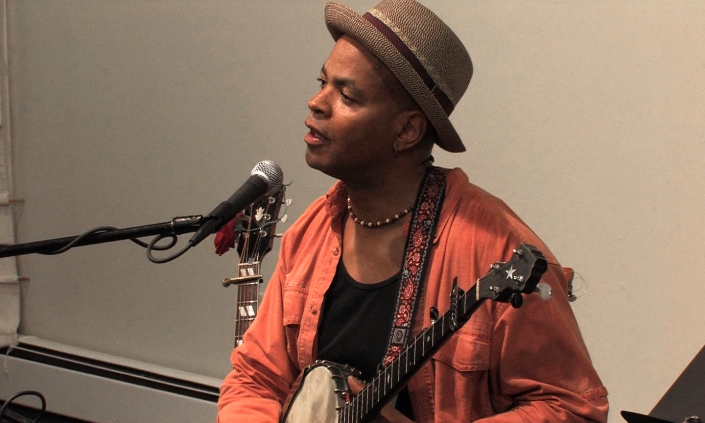 Many thanks to pianist David Janeway for having the vision to put together this super-summit of stellar jazz artists — four of whom live right here in the Hastings-on-Hudson/Dobbs Ferry area. Click here to check out some live video by clicking here, as well as some stills below — all courtesy of Simon Feldman of Hudson Valley Music Channel. 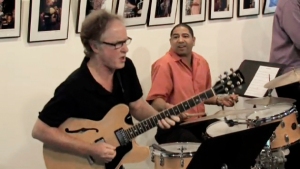 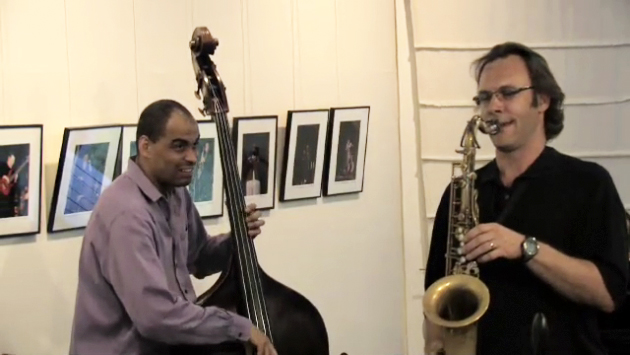 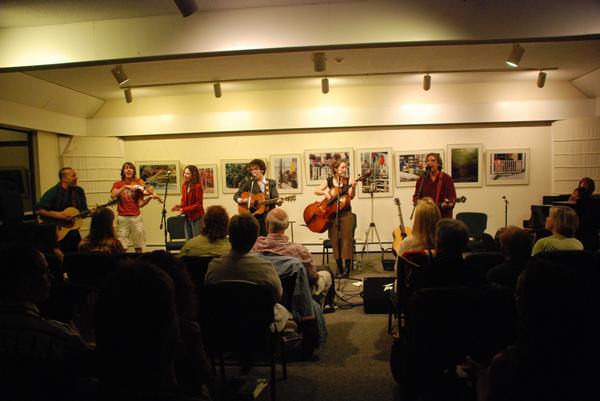 Since you can’t see him in the photo above, here’s a chance to see and hear Anthony’s good friend John Elliott, who sat in to cover Anthony’s song “Note.” Just gorgeous.

Port o’Monkeys performed on such eclectic instruments as the harmonium (left) and the oud (right). (Photo courtesy Jim Howe)

In addition to the guitar and mandolin, members of Port o’Monkeys also played the Swedish nykleharpa (behind the guitar) and the dutar from Afghanistan as well as various hand drums. (Photo courtesy Jim Howe)

Port o’Monkeys in full swing. The instrument standing at center is a dutar from Afghanistan. (Photo courtesy Jim Howe)

We’re thrilled to be able to present the entire first set of this incredible group’s performance at Common Ground, thanks to Simon Feldman of Hudson Valley Music Channel (HVMC.TV). Simon is creating a really invaluable record of the best live performances in the Hudson Valley. Deep gratitude, Simon from all of us at Common Ground. Look for Part 2, coming soon. And thanks to Jim Howe for the photos below.

Click here to view the first half of Luminescent Orchestrii’s Concert. Enjoy! 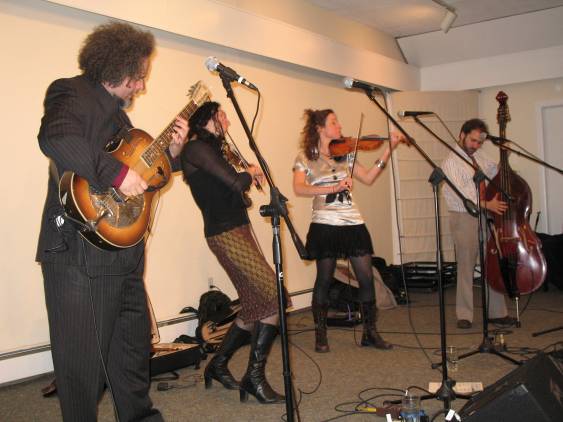 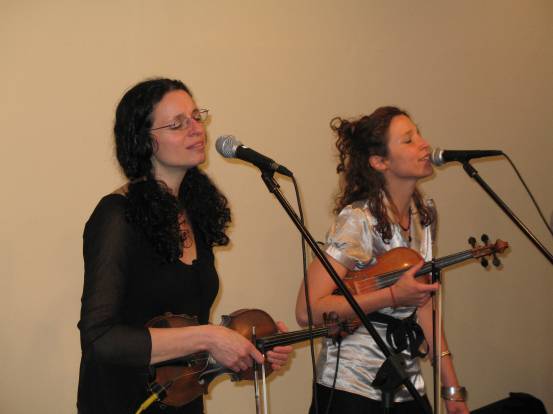 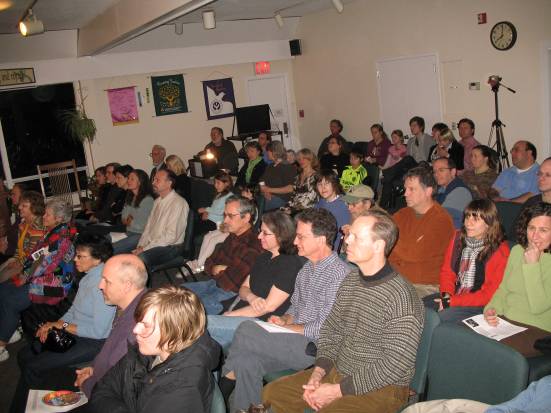 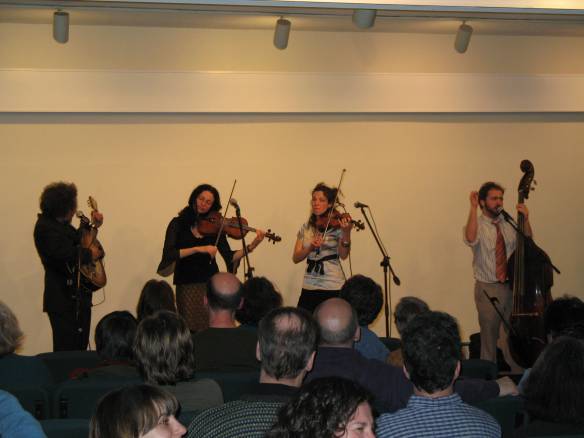 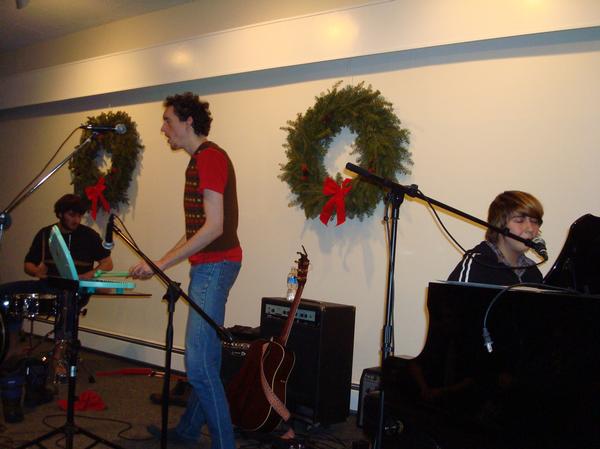 October 27th, 2007: Star Island All-Stars/First U Rock & Soul Revue
A great evening was had by all at Common Ground of October 27th with the Star Island All-Stars, the First U Rock and Soul Revue, and soundman extraordinaire/poet of Star Island, John Robbins. Hats of to Kemp, Adrian, Oneika, Carl, and Hope of the All-Stars. And cheers to Ray, Stephen, Arnie, Eric, Gary, April, Leslie, both Joe B’s, and Suzie of Rock and Soul. Of course, all the Common Ground volunteer crew also deserve kudos for helping everything run so smoothly, especially Carol, David, Susan and Larry.

But I also want to thank Ted Berkowitz, because in a lot of ways, he proved on Saturday night what Common Ground is all about. One of the main things that we strive to create at Common Ground is a relaxed venue where those who come to our shows can feel like active members of a community instead of passive consumers of entertainment “product.” Because Common Ground is held in a small space, there is a shared intimacy between our audiences and artists. And as Ted Berkowitz proves, sometimes there are artists IN our audiences. Below, I’m thrilled to present you, our online community, an illustrated celebration of last Saturday’s concert, with huge thanks to Ted Berkowitz for sharing his gift with us. A magical night is now memorialized in artwork AND memory! Thanks, Ted. 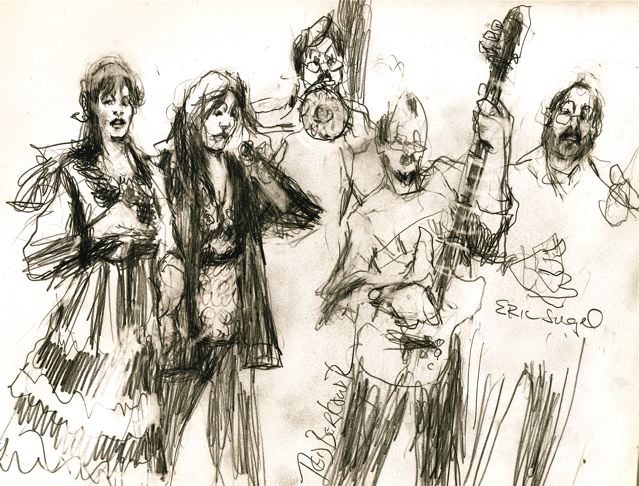 This site uses Akismet to reduce spam. Learn how your comment data is processed.

Common Ground Concerts is the producer of the long-standing Common Ground Coffeehouse at the First Unitarian Society of Westchester at 25 Old Jackson Avenue, outside of Hastings-on-Hudson NY.

Questions? Feel free to contact us by emailing at commongroundconcerts@gmail.com.

For a complete calendar of upcoming concerts at Common Ground Coffeehouse in Hastings, PLEASE CLICK HERE or on logo below.

The proof copy of the Common Ground Cookbook arrived today, and it looks great! It should be available on Amazon by the end of the week!
Almost done...
Our Little Christmas Crackhouse!

Artists Who Have Appeared at Common Ground